The era of the traditional Metropolis, fanning out in waves of decreasing density from a single core central business district, may be coming to an end. As we approach the new normality of cities housing 10 million or more inhabitants,1 those best positioned for the future are evolving along polycentric, multi-nodal lines, with several central business districts, ideally all offering something slightly different to the urban inhabitant. When focused around transit nodes and well-planned infrastructure, embracing high density, public space and civic functions, this amalgamation of “several cities within a city” perhaps offers the best opportunity for a sustainable future for the many millions of people who will move into cities over the coming decades.

The concept of polycentric cities is not new. New York developed both its Downtown and Midtown in differing waves of development, and London was polycentric almost from its origin. However, even New York and London are seeing several new urban clusters shift the centers of gravity around the city whole, as other cities based on the core-CBD model – Hong Kong for example – shift density out beyond the established center. The physical manifestation of this is often an undulating skyline, with density rising to a series of apexes across the city.

There is perhaps nowhere that demonstrates this concept better than our host city for the core of the 2018 conference, Dubai. Indeed, it could be argued that Dubai, a city that has largely risen in just three short decades, is a pure result of this de-centralized urban approach, comprised as it is of evocative-sounding districts – Downtown Dubai; Business Bay; Dubai Marina; Festival City; Palm Jumeirah; and several others. New “centers” are still being added, including Midtown; Emirates Business Park; Meydan One; and Dubai Creek Harbour, anchored by the under-construction Dubai Creek Tower.

The same is true of many Middle Eastern cities, and most certainly our second host city for the conference, Abu Dhabi, where the drive toward polycentrism has been accompanied by a profound and concerted effort to forge a unique urban and architectural identity. Growing rapidly from what was a comparatively small desert settlement in the 1960s, the city now incorporates a number of new districts anchored by skyscrapers that respond to the cultural and environmental conditions of the region, such as the seminal Al Bahar Towers and World Trade Center Abu Dhabi. Meanwhile, a new urban community, Masdar City, has become a real-time testing ground for net-zero technology at the neighborhood scale and the incorporation of autonomous vehicles for personal transit.

Equally as important as the centers themselves is the infrastructure that connects them.2 To enable the creation of new urban centers that match the socioeconomic intensity of longstanding metropolitan hubs, we must devise practical means of transportation that maximize geographical access and provide extensive city services, not just in the horizontal direction, but vertically. Such systems will progress the concept of transit-oriented development along a course of natural evolution, to polycentric city-building.
The 2018 conference thus formed an ideal venue in which to debate the merits and challenges of this multi-nodal approach to urbanism, and to understand and envision how tall buildings, density, infrastructure and people fit into this vital mix.

Why Dubai and Abu Dhabi?

1. Research for the CTBUH 2016 Conference, Cities to Megacities: Shaping Dense Vertical Urbanism, showed that there are now 45 megacities of 10 million or more people in the world. For more on this study, see Megacities: Setting the Scene.
2. The CTBUH 2017 Conference, “Connecting the City: People, Density & Infrastructure” explored this idea in detail. 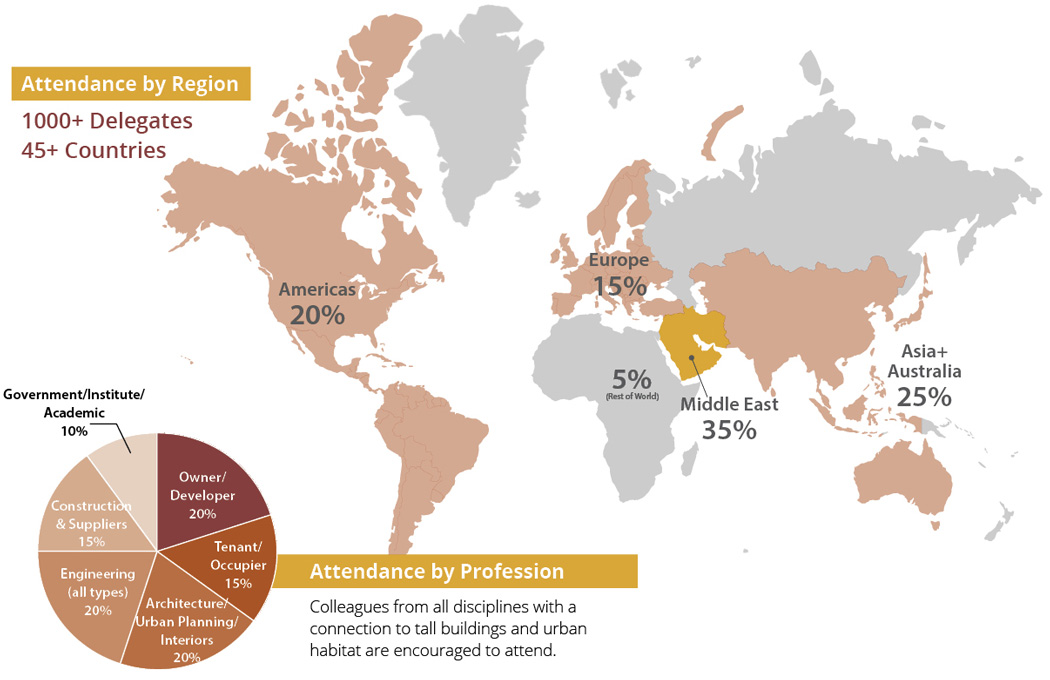